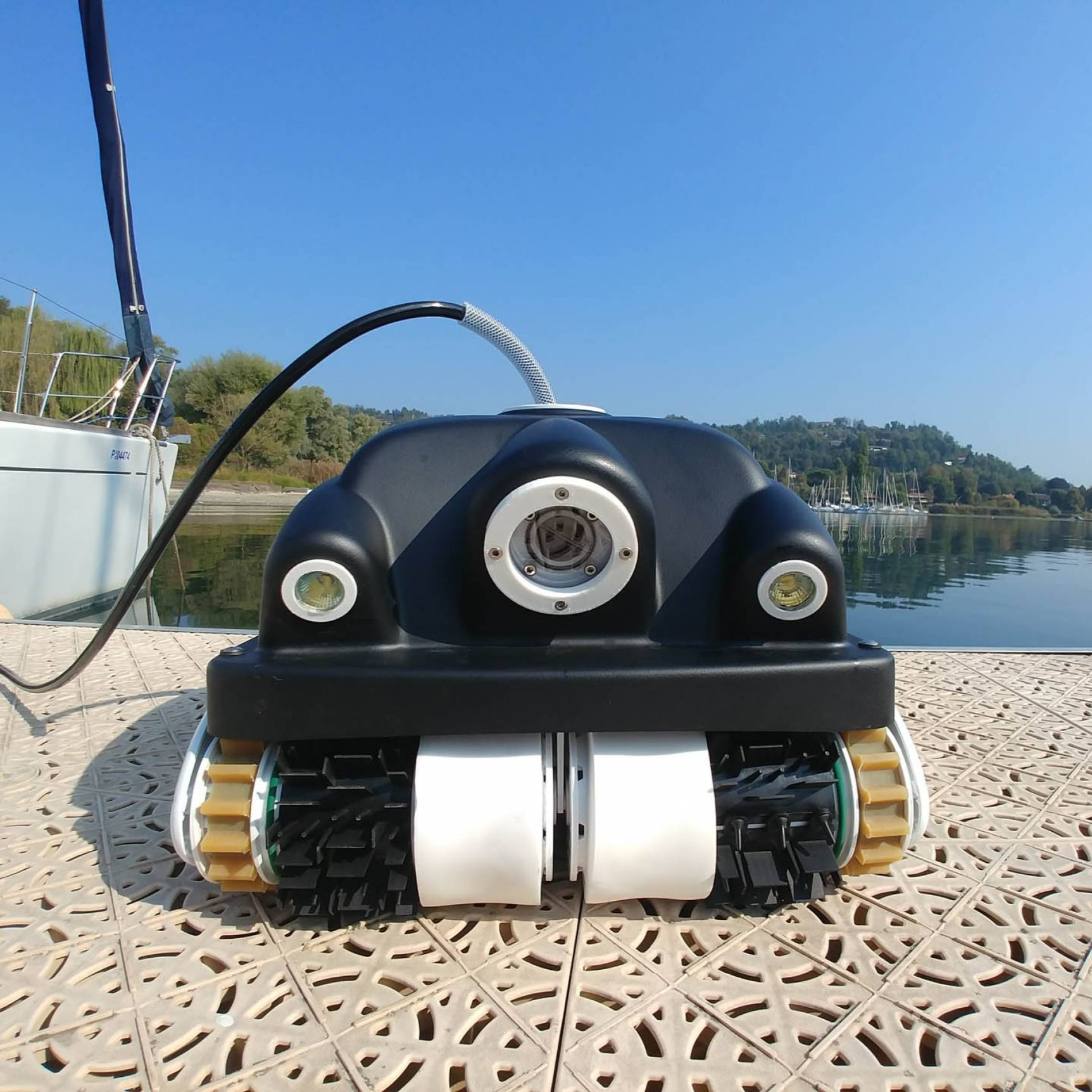 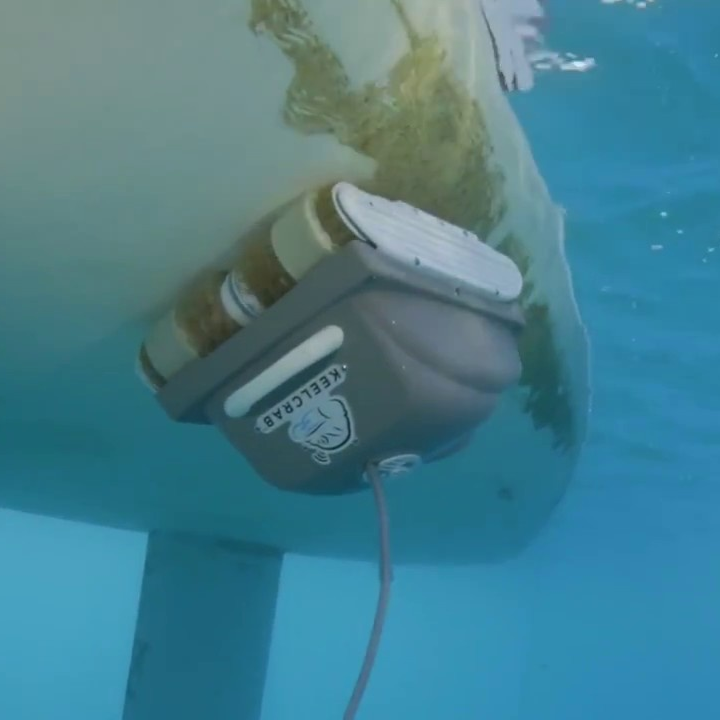 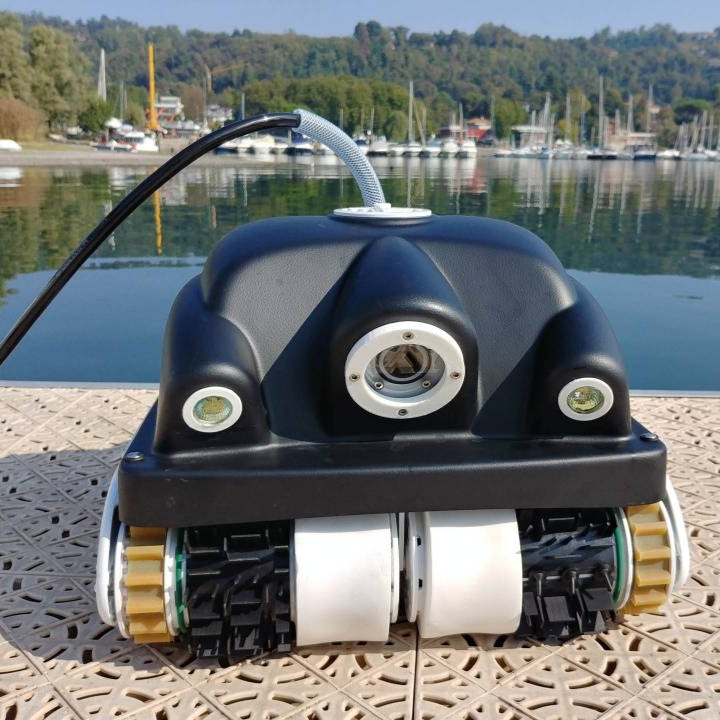 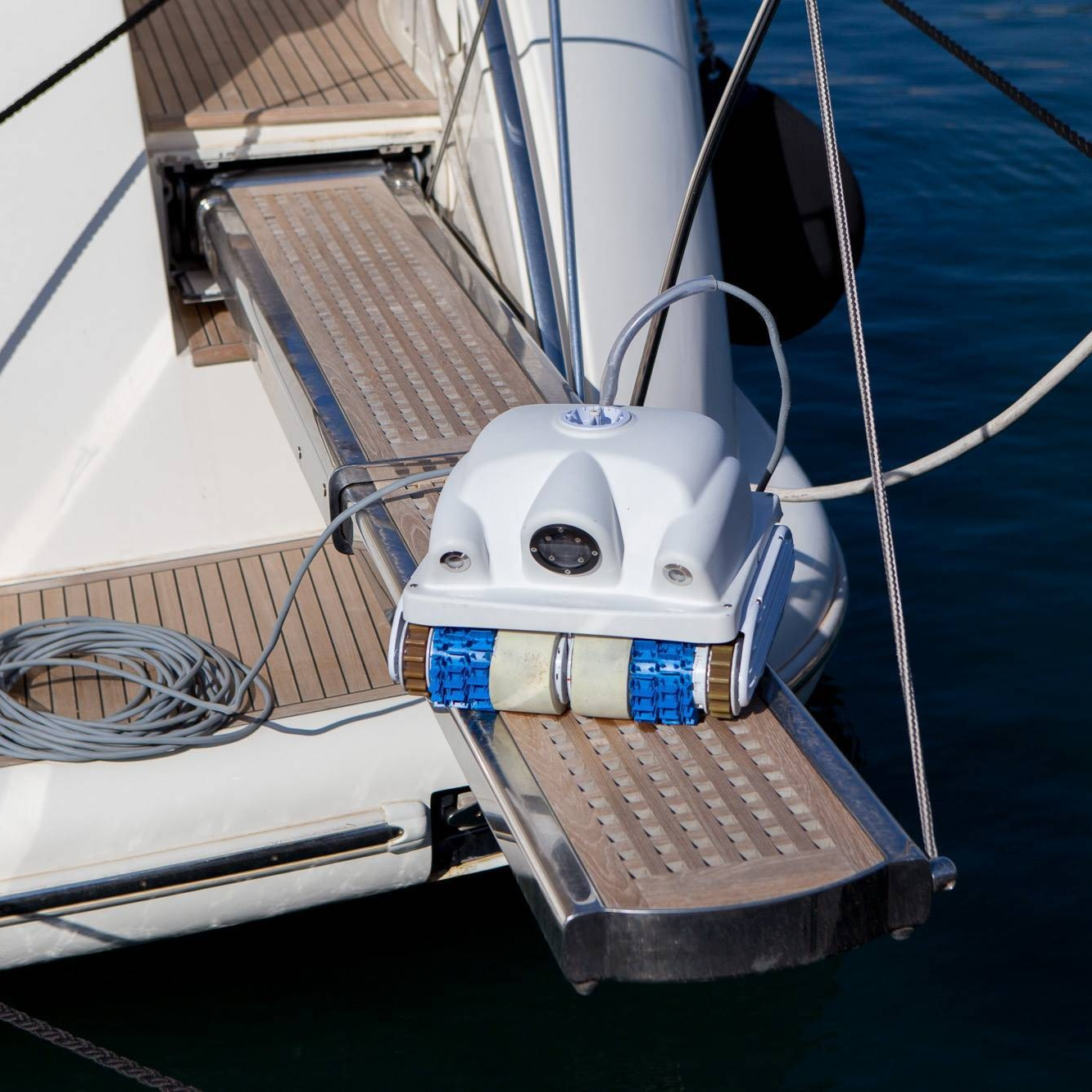 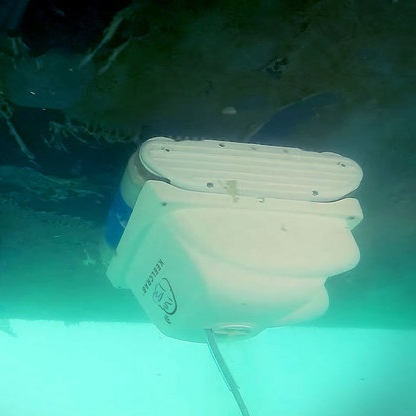 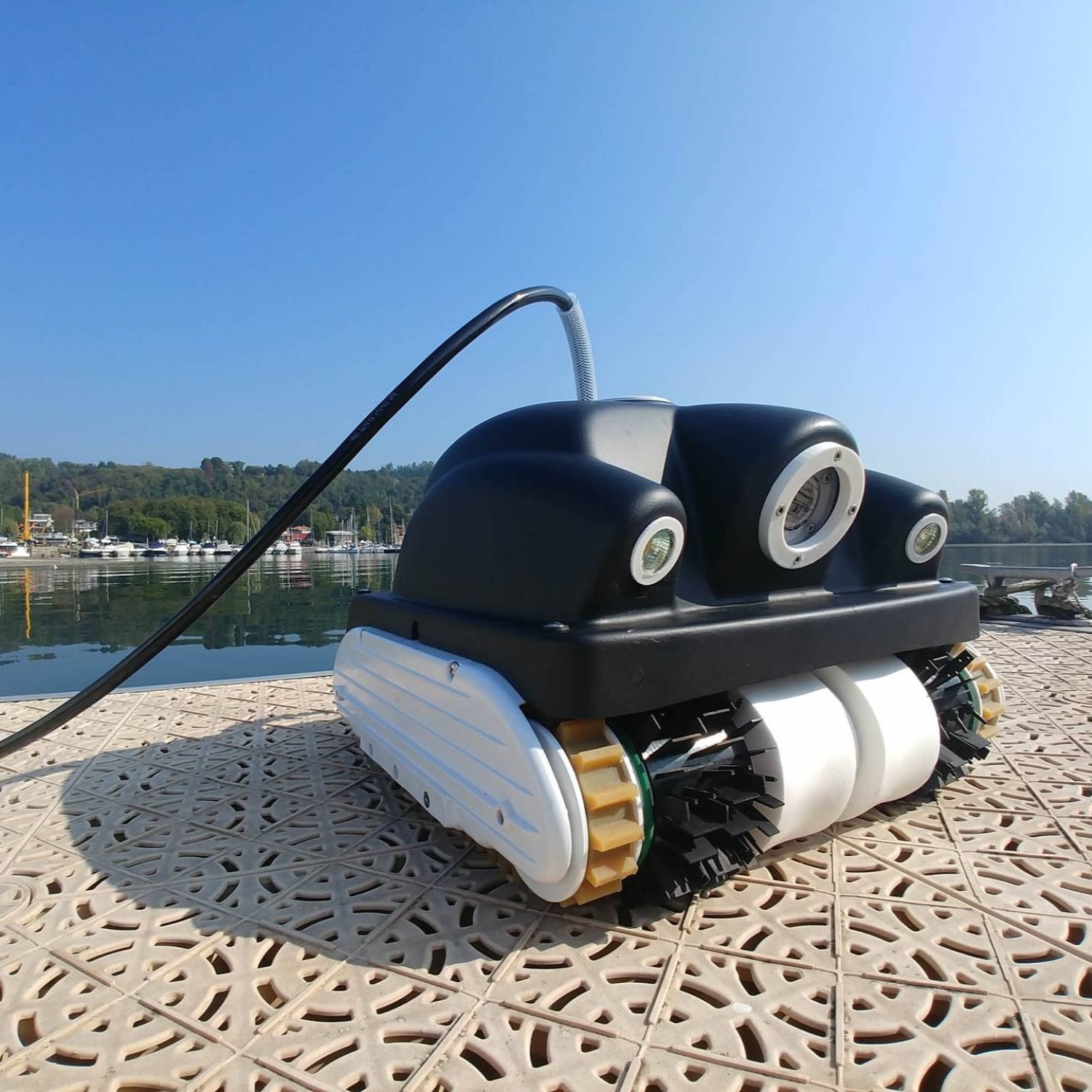 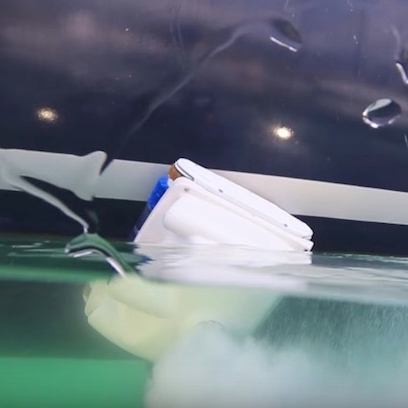 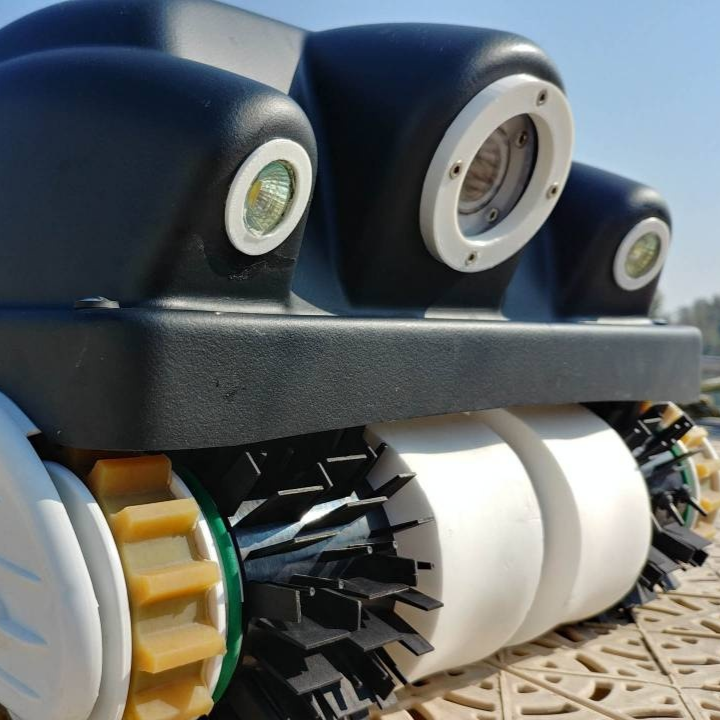 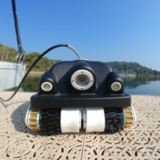 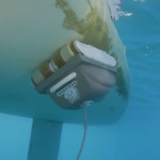 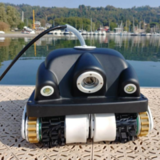 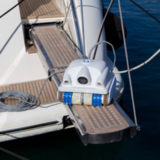 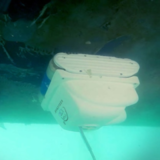 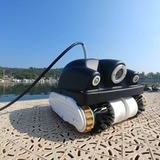 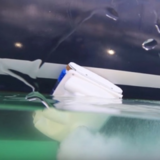 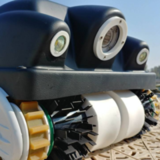 Thanks to its rubber or PVA brushes on tracks the drone easily moves in all directions on any surface. The high-resolution underwater camera installed on the drone allows Keelcrab to be manoeuvred via remote control with cord and may be connected to a tablet or phone. As for the cleaning aspect, KeelCrab is equipped with central counter-rotating brushes with nylon bristles of varying length and size and easily interchangeable depending on your needs. The brushes are A.N.C.C.P. certified and do not remove anti-fouling paints. On the contrary, they make them last longer: numerous tests have shown that removing the first layer of vegetation (3/5 mm) on a regular basis significantly extends the efficiency of the anti-fouling agent; this prevents barnacles from attaching to the hull in the medium term.
The drone is also provided with a nylon filter bag of varying micrometre size (optional) for the recovery of waste material, algae or vegetation, resulting from the cleaning operation.
The warranty certification is valid for 24 months.

What is Keelcrab drone able to remove?

Keelcrab cleaning function is set to make the drone able to remove algae and vegetation; numerous tests have proven its effectiveness even on boats moored in port waters since 6-12 months

Does Keelcrab remove mussels or barnacles? If not why?

It doesn’t for valid reasons. First of all, in case such organisms grow up on hull’s surface, it could mean two things: either the anti-fouling paint used is not suitable for the waters where the boat is moored or it’s been too long since the last time the anti-fouling has been drafted on the hull’s surface. Secondly, our experience has taught us that their removal on the water could be very dangerous for the safety of the hull and for its life cycle. Such organisms normally stick so hard on the hull that their forcible removal through a large abrasion, is being able to provoke for sure the detachment of the paintings and in the worst cases this operation could compromise the physical integrity of gel coat causing as a result problem of moisture infiltration and osmosis. In such cases, there’s no other solution but to take the boat out of the water and to let the dockyard make the standard cleaning cycle usually performer by raising the boat with a crane.

Can I potentially clean all the hull’s surface using Keelcrab?

In terms of percentage, Keelcrab is able to clean 80/90% of the hull of a sailboat and motorboat with planing hull by 40 feet and up leaving to the shipowner or professionals the shafts, propellers, rudders and corners

How many times do I need to use Keelcrab?

It depends on several factors such as the temperature and the type of water, the presence of freshwater tributaries and seasonality. However, our experience allows us to say that if water temperature exceeds 22/23 degrees it is advisable to use it even once a month.

Our certificated BRUSHES (A.N.C.C.P.) confirms that Keelcrab has the best respect for all fixed matrix anti-fouling and indeed its use prolongs the useful life of the chemical product because over time we remove the first layers of vegetation we keep the paint in direct contact with water. In the case of self-smoothing or mixed paints, the removal of the central brush is obligatory. The sucking effort of Keelcrab, in that case, has the double effects of maintaining Keelcrab in adherence and cleaning capacity. Our tests show how the use of Keelcrab without a brush (comparing the force of suction in kg and speed of advancement) simulate the navigation of about 2-3 knots and a means of advancement, stimulating the natural self-cleaning process of these paintings.

Allow 3-5 business days for the order to ship. Due to current situation, some shipments and deliveries may be delayed for a few days. We appreciate your patience and understanding.

More about assurance
ru fr it de es
Account Favourites Cart 0
Contacts Delivery +49 (0) 69 951 799 25
Added to your cart
Continue shopping
Go to your cart
Added to favourites
Removed from favorites
SUBSCRIBE OUR NEWSLETTER
Subscribe to our newsletters and we will introduce you to our special offers, new products and yachting news. You can unsubscribe any time if you decide that you are not interested in it.
more